when you set Build mode to Genetic evolution in What to build -> Build Mode, a new tab Genetic options will appear in the settings. 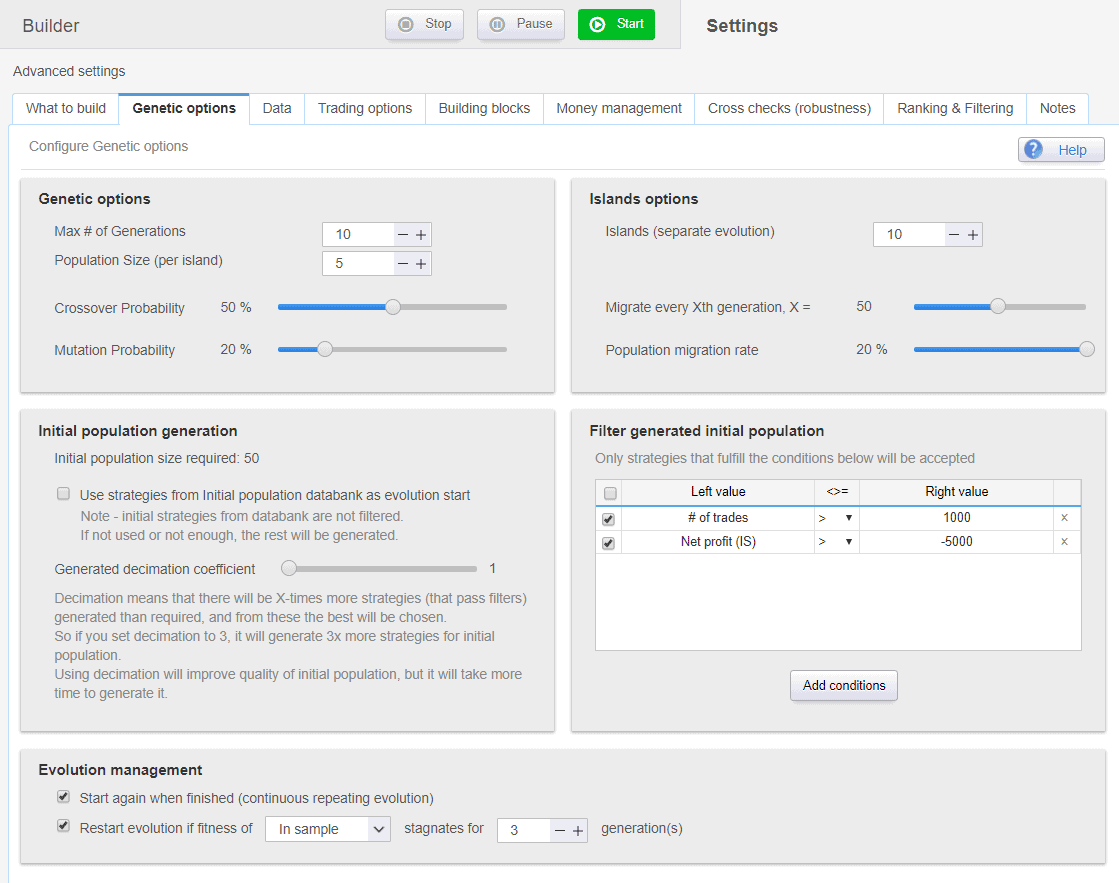 There you can set up various properties of genetic evolution.

Max # of Generations
number of generations for which the population will be evolved. Recommended value from 5 – 100. It usually doesn’t bring much improvement to use too many generations, it is better to just restart the evolution and start from the scratch.

Population size
size of population on one island. Recommended value from 10 – 100 or even more. Please note that if you use more than one island, your total population will be (number of islands) x (population size), so make sure you’ll not have some very extreme number.

Crossover and Mutation probability
probability of basic genetic operations. You can experiment with these values, for example increasing mutation should generate more diverse strategies.

Islands
number of separate islands. Islands are a new concept in SQ X, they allow running genetic evolution separately in isolated islands, with occasional migration of individuals between islands.
There’s no problem having just one island, the recommended value is 1-10. It doesn’t make much sense to use more than 10 islands, it could make your total population very big and it would take a lot of time to just evolve one generation.

Migrate every Xth generation
how often to migrate some individuals from island to island. It is usually good to migrate the individuals, it can “unlock’ some island that got stuck in the local minimum. It shouldn’t be too often, because then we’d lose the diversity of the independent islands.
Recommended value is for example every 10 generations.

Genetic evolution starts from some initial generation. It will either be generated randomly, or you could use some existing strategies as initial population and try to improve upon them.

Generated decimation coefficient
Decimation means that there will be X-times more strategies (that pass filters) generated than required, and from these the best will be chosen.

If you set decimation for example to 3, it will generate 3x more strategies for initial population and choose the best from this.

Using decimation will improve quality of initial population, but it will take much more time to generate it.

Please use it wisely, because it can greatly increase the number of strategies that need to be generated for initial population, so ii might take very long time to just generate the initial strategies before evolution even starts!

Here you can set up filter to set some basic minimum that a strategy should have to be in the initial generation.

Please use it wisely, genetic evolution should be able to improve any population of strategies, so don’t be too strict with your initial generation.
The only recommended filter to use is by number of trades – to filter out strategies that are not trading at all.

Start again when finished
if checked it will restart the building process when it finished. So you can let it run autonomously, and SQ will evolve more and more populations until you stop it.

Restart evolution fitness if..
it will restart evolution if we are stagnating in fitness – this means that the population as a whole is not improving, so it is better to start again from the beginning.

Please Login to comment
We use cookies to ensure that we give you the best experience on our website. If you continue to use this site we will assume that you are happy with it. Ok
You are going to send email to
Move Comment