I would like to thank StrategyQuant s.r.o. for providing free licenses for the algorithmic trading club I run at my high school Střední odborná škola průmyslová a Střední odborné učiliště strojírenské, Prostějov, Lidická 4. The link to the thematic plan is here: https://spsasoupv.cz/vzdelavaci-projekt-analyza-datovych-sad-financnich-trhu/.

Let me introduce myself. I have been involved in algorithmic trading for several years, I know how complex the path is from the first idea, through the programming of algorithms to the final evaluation of whether the algorithms succeed in the live market. The latest algorithm I designed and rolled out myself works on XAUUSD and NAS100, is based on the SUPERTREND indicator and uses a maximum of a sevenfold increase in position if the trade ends in a loss. In programming the algorithm, I ran into imperfections in the code that had to be corrected, and I discovered how the indicators affect different quote times at different brokers. It took months to fine-tune the algorithm. Here are the outputs from my last algorithm:

My SuperTrend algorithm on NAS100

My SuperTrend algorithm on XAUUSD

I was already familiar with StrategyQuant from the past, and after being approached by students who wanted to take a course in algorithmic programming, the strategy building path in the SQ Program seemed the best for them. The collaboration with StrategyQuant s.r.o. has begun 🙂

The students and I started generating strategies using a genetic algorithm for currencies, indices, metals and stocks. Then we could see which markets were better and worse to trade algorithmically. We generated strategies mainly for timeframe H1. Several computers were running continuously in the school to generate strategies and then optimize them. We imported the generated source codes that passed the out of sample test into the MetaTrader 5 trading program. There we sorted the strategies from best to worst and started optimizing them on different data from different brokers. We chose to optimize on the 2018 – 2021 data with 1/2 of the data for optimization and 1/2 as an out of sample test. We sorted the out of sample test results by the highest profit factor and found among the first few rows of results that the optimization has a similar profit to the out of sample period. This fact proved that there was no over-optimization. Next, we ran the setup on the 2021 – 2022 data. It was found that each algorithm experiences slightly less profitability than the optimization and over time this profitability decreases from the optimized period.

The result of using SQ is that the students did not need to know the issues of algorithmic trading in detail, including programming, and despite this they were able to construct a successful trading portfolio using the frameworks I had set for them to follow. Using the SQ program to generate strategies using the genetic algorithm speeds up the development of the algorithms several times over, and the user can be confident that the generated algorithms work without programming errors.

When evaluating the success of a trading strategy, a strategy developer can use a large number of strategy metrics. One of them is the profit factor. Profit Factor may be … 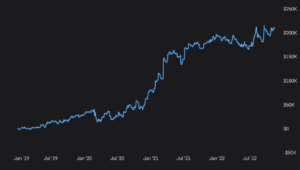 Firstly, thank you Naoufel for giving the interview about your trading experience. In the last interview you introduced to us your verified portfolio (https://kinfo.com/portfolio/12154/performance) which has recently hit a new …